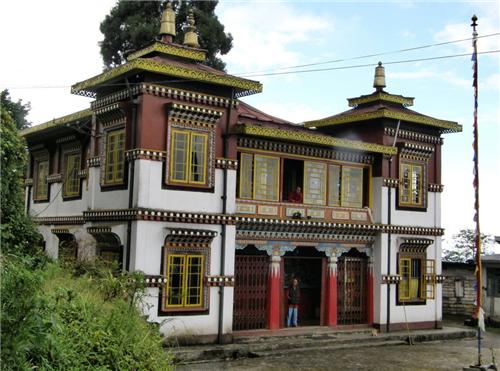 Although it is formally known as the Kaarma Dorjee Chyoling Monastery, in Darjeeling it is better known as the Bhutia Basti Monastery. It is a branch of the Phontag Monastery of Sikkim and belongs to the Nyingmapa sect of Tibetan Buddhism. Nyingmapa literally means ancient and true to its name, it is the oldest of the four major schools of thought followed by the Tibetan Buddhists.  The sect, which originated in the eighth century BC, has incorporated the deities as well as the rituals followed by the people of the pre-Buddhist era. Hence mysticism is also part of their religion.


How to get to Bhutia Basti Monastery

The name Bhutia Basti Monastery is derived from its location in the Bhutia Basti; which was originally a Bhutia colony located around a kilo meter away from Darjeeling town. To get there, one can either follow the C. R. Road from the Chowrasta Mall or walk up hill from the Lebong Taxi Stand. However, since the former involves only downhill walk, it is far easier to take that route.

The Route from the Chowrasta Mall

C. R. Road starts from the side of the Café Coffee Day on the Chowrasta Mall. In the beginning, the road is narrow and winding; but later it becomes wider and more scenic. One first passes the Step Aside, which houses the Deshbandhu Museum. However, visitors to the gumpha will have to keep on walking until they reach the arched gateway of the monastery. There is a word of caution though. Although the views are marvelous, the road is steep at places and therefore, it will not be wise to get too much engrossed in the scenic beauty of the place.

The History of the Bhutia Basti Monastery

The Bhutia Basti Gumpha was originally located where the Mahakal Temple stands today. It is said that a Lama called Dorje Rinzing built a monastery on top of the Observatory Hill on Mall Road. It was in the year of 1765. The monastery was known as the Dorjeling Monastery. Many believe that the name Darjeeling is derived from it.

All went well for forty years. In 1815, Gorkhas from Nepal invaded the place; they plundered and destroyed the gumpha. It was rebuilt in 1861; but by 1870, the monastery had to be shifted to the Bhutia Basti. The present monastery was built in 1879.

However, misfortune kept on chasing the monastery. An earthquake in 1934 completely destroyed it. However, this time the Chogyal of Sikkim came forward with help and the present monastery was built under his patronage. That is why one can find influence of Sikkimese architecture although the traditional Tibetan style of architecture has mainly been followed.


Inside the Bhutia Basti Monastery

On entering the monastery, visitors are first led to the main prayer room. The focal point of this room is a large replica of Lord Buddha; it is preserved in a glass case. Nearby, a photograph of His Holiness Dalai Lama has been kept. On another side, a beautiful image of Tara Devi has been placed. Lakshmiswari with thousand eyes as well of hands is also worshiped here. As we have already mentioned that Nyingmapa sect has incorporated all the deities and rituals of the pre-Buddhists era and that is why we see Goddesses such as Tara and Laksmiswari receiving adulation along with Lord Buddha.


Murals Depicting The Life Of Buddha: 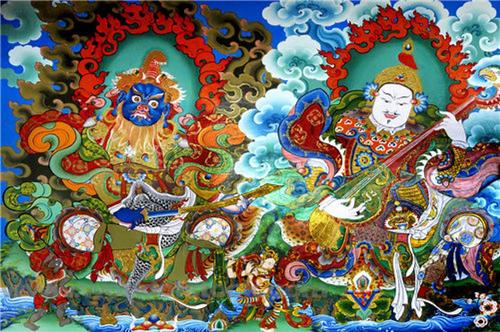 On one side of the room, one can see a large mural depicting the life of Lord Buddha. Stones of various colors have been crushed to create such murals. Wherever it deemed necessary to add a glittering effect, dust made out of real gold has been used. Outside The Prayer Room: Just outside the prayer room stands a hollow drum. Such drums have prayers written all over them. One is supposed to rotate the drum and say prayers. Murals with religious connotation can also be seen on these drums.


The Route to go Back from the Bhutia Basti Monastery

One can of course take the route described above. However, that will mean climbing uphill all the way. That is why it is better to go straight to the Lebong Taxi Stand and take a taxi from there. It will not take more than 10/15 minutes to reach Chowk Bazar by taxi. However, unless one is ready to pay for the entire taxi, one is likely to get stuffed like chickens inside the vehicle. However, that is not too high a price to pay.