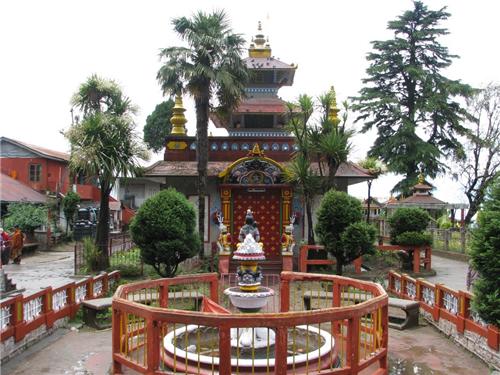 Although Dhirdham Temple in Darjeeling looks more like a pagoda, it is actually a temple for Lord Shiva.  Apart from Mahakal Temple on Observatory Hill, this is the second Shiva temple within the periphery of the town.  It has been constructed under the patronage of King of Nepal in the year of 1939. That is why the architecture of the temple follows the Nepalese style rather than standard Indian design. 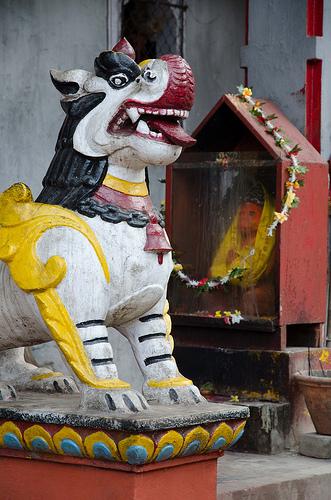 The Architecture of Dhirdham Temple

In fact, Rai Sahib Purna Bahadur Pradhan, at whose behest the temple was constructed, wanted the temple to be an exact replica of Pashupatinath Temple of Kathmandu.

As we all know Pashupatinath is the national deity of Nepal and is much revered by the Nepalese people. Since the majority their origin, building the Shiva temple resembling the Pashupatinath temple is a quite natural thing to do.

It has to be remembered, just as most temples of Nepal, the design of the Dhirdham temple is an amalgamation of Hindu and Tibetan School of architecture. Although the temple was built under the patronage of the King of Nepal, it was designed by a Gorkhali architect Beg Raj Sakya.

Incidentally, the term Gorkha or Gorkhali is used by Indian Nepalese to establish a separate identity and to distinguish themselves from the people of Nepal.

As we have already stated, Dhirdham Temple looks more like a multi layered pagoda. The exterior of the temple is painted in vivid colors such as while, red and yellow. The temple of West Bengal is surrounded by lush green trees. The whole atmosphere seems saturated with spiritual tranquility.

A statue of Lord Shiva is located near the gate of main temple. It is white in color and has five faces, each of which represents a different mood. It also has three eyes and hence the name Pancha-Bakram-Tri-Netram.  It faces the temple gate.

Inside the Main Temple: 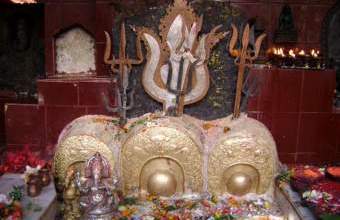 On entering the temple, one can see Shiva Lingas with a trident on top.

The priests are very courteous and so the visitors can offer their adulation for as long as they want.

Once they have worshipped to their heart’s content, they are offered the red sindur tika, which represents the blessing of the Lord.

Dhirdham Temple is located in the vicinity of the railway station.  From Chowrasta Mall one must first take up Nehru Road and then walk down to the Kaventer’s. The road bifurcates here. One must take up the road that goes downhill and keep walking. It will ultimately lead to the railway station. The Dhirdham temple is just below the station.

Timings of the Temple:

The temple is open all day long from 8 Am onwards. The Aarti is held at 8 AM and 6 PM every day. There is no entrance fee; neither there is any regulation. Everybody can enter the temple to offer worship to the Lord.

The temple is open all through the year. However, during the Shivaratri (February/March) special festivities are organized.