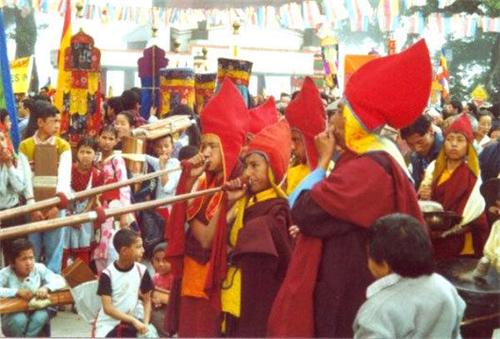 Darjeeling is inhabited by people of diverse culture and faith. Along with the Gorkhas a sizable population of Lepchas and Tibetans has also made this town their home. While the Gorkhas are predominantly Hindus, the other two communities follow Christianity and Buddhism respectively. That is why one can witness Hindu, Christian and Buddhist feasts being celebrated with gusto in different parts of the town.

It is to be noted that Hindu and Buddhist festivals are celebrated according to lunar calendar and hence no fixed date can be assigned for these feasts. Moreover, while discussing them we will bypass all India celebrations and concentrate only on regional festivals. 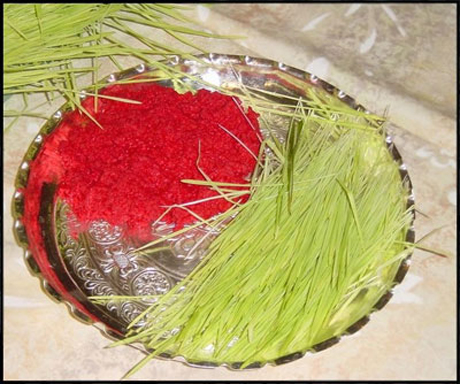 The first festival we want to mention is indeed an all India festival, but the Nepalis call it Maghe Sankrati and celebrate it by eating Tarool and different kinds of tubers known as yam. This is celebrated on the first day of Magh, which generally falls in the middle of January.

Basant Panchami is also another Hindu festival celebrated mostly by the Gorkha population. They worship Mother Saraswati, the Goddess of learning on this day. If there is a new beginning to be made, they choose this day for that. Moreover, farmers celebrate the day by sowing seeds.

Next comes Ram Navami. On Ram Navami day, chariots carrying idols of Lord Rama is taken out along with pomp and glamour. Chaita Dasai is celebrated by the Nepali community as the day when the good triumphed over the evil.  On this day they worship Devi Mata for strength and put rice tika on the forehead. Business men also open new account on this day.

Another important festival is the Guru Purne. It falls in the month of Bhadau. According to Nepali tradition, the gods and goddesses go to sleep in the month of Shravan. On this day the witch doctors or Jhankris come dancing and singing to wake them up. On the same day, they also celebrate Raksha Bandhan. However, in Nepali tradition, priests tie such Rakhis as a symbol of protection. 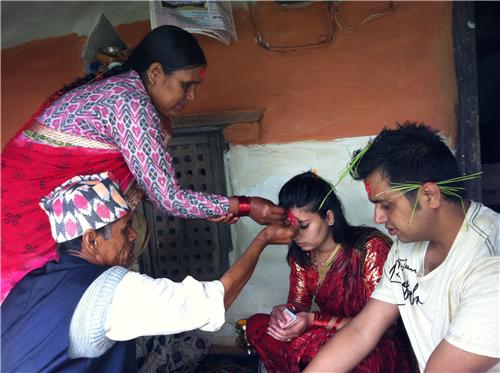 However, their greatest festival is the Dasain or Durga Puja. It starts with Jamare Aunshi, which is actually a new moon day. On this day they remember their ancestors and perform Shrada. From next day starts the Shakti Puja and it continues for nine days. On the seventh day, ladies take out different types of flowers in procession round the town; it ultimately culminates at the Durga Temple in the town. This is known as Phul Pati.   The next day is Mar, when buffaloes are sacrificed.  The tenth day is the Tika Day. From this day onward people go from house to house asking for blessings from the elders.

Tihar is the next important festival for the Gorkha population of Darjeeling. It is in fact a series of festivals that starts with feeding the crows and ends with Bhai Tika. On the third day Goddess Laksmi is worshipped. It is also customary to celebrate the day with lights and fireworks. Gambling is also a part of this festival. Young girls too go singing Bhaileni from door to door. 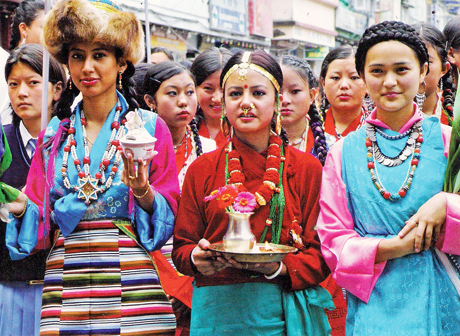 Other festivals celebrated by Gorkha Community

Sansari Puja is the worship of Devi Mata for universal good. It is believed if the Goddess is angry epidemics will break out and bring in hardship. Ashat ka Pandra or the fifteenth day of Ashar is also another important date in Nepali calendar. They celebrate it by eating curd and chewra. Sawane Sankranti is celebrated on the first day of the month of Shravan. On this day they worship Mother Goddess to protect themselves from diseases such as scabies. Nag Panchami, Kushe Aunshi, Teez, Biswakarma Puja are some more festivals celebrated by the community.

January is an important month for the Tibetan Buddhists. End of this month heralds end of the Tibetan year. At that time they perform different rituals to avert the negativity of the previous year.  Among such ritual the Cham dances is worth mentioning. The Dali monastery also organizes Chakrasambhara prayer around a colorful Mandala.

In February, the Tibetans welcome the New Year with a weeklong ceremony. This is known as the Loshar. Tibetans wear new clothes and prepare delicious food. One can also witness yak dances being performed on the streets of Darjeeling. However, as we have already said, Tibetans festivals are celebrated according to lunar calendar and hence Loshar can also fall in the beginning of March.

On the 11th day of Loshar, the Tibetans celebrate Cho Nga Chopa. This is celebrated to increase the merit as well as devotions of the Buddhists.  Chotrul Duechen is the day of offering for the Tibetan Buddhists. It is celebrated on the 15th day of the Loshar. It is said that on this day Shakyamuni, showed certain miracles to Indian philosophers and convinced them of his enlightenment. 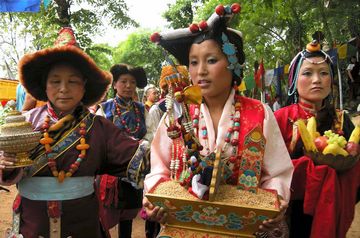 Saga Dawa is another important festival. It is also the fourth month of the Tibetan calendar. According to Tibetan school of thought Shakyamuni received enlightenment as well as parinirvana on the fifteenth day of this month and hence this day is very important for them. Buddha Jayanti or the birth of Buddha is also celebrated with pomp. Idols of Lord Buddha along with Holy Books are taken out in processions from Buddhist Monasteries. Musical troupes generally accompany these parties.

Other festivals celebrated by the Tibetan Community

July is a very important month in Tibetan Calendar. The birthday of His Holiness Dalai Lama, Dzam Ling Chi Sam or the ‘local deity day’ as well as Chokhor Duchen falls in this month. The last one is the day Lord Buddha started preaching his philosophy for the first time. It happened at Sarnath near Benaras.

The next ceremony we can talk about is Tshechu. It is the birth anniversary of Guru Padmasambhava. Also known as Guru Rinpoche, he was the first person to preach Buddhism in Tibet. In general this festival is celebrated with music and dance.

Lha Bab Duchen is another important ceremony. It is said that Shakyamuni went to heaven to liberate his mother, who was reborn in the house of Lord Indra. The festival celebrates Shakyamuni’s descend from heaven. Ngenpa Gu Dzom celebrated at the end December is possibly the last festival of the year.  It is a protection against nine bad omens that occur together.

Festivals celebrated by the Lepcha Community 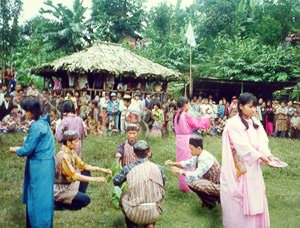 Apart from different Christian festivals such as Easter and Christmas the Lepcha community also celebrates some indigenous festivals such as Tendong Lho Rumfaat. They believe they are the descendents of the tribe that survived the rainfall, which lashed the earth continuously for forty days and forty nights by climbing the Tendong Mountain.

Tendong Lho Rumfaat or the prayer of Tendong Mountain is festival that celebrates such a glorious escape. This festival generally takes place on 8th August.

Apart from that, Lepcha community also celebrates four other festivals. While Leerum is the prayer of the ancestors and Chenrum is the prayer of the nature Cheuram is prayer to their guardian mountain, the Kanchenjunga. Lambun is the day when the demon Lhaso Mung Punu was defeated. Lepchas celebrate it with good food, new days and lots of merrymaking. They first make an effigy of the demon with rice and after a prayer have it removed from their home. Merriment starts only after that.

Secular Festivals which bind all Communities 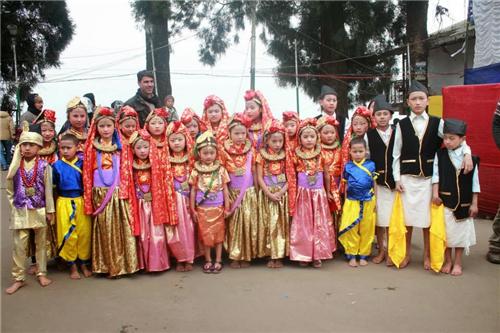