The Mahakal Temple in Darjeeling 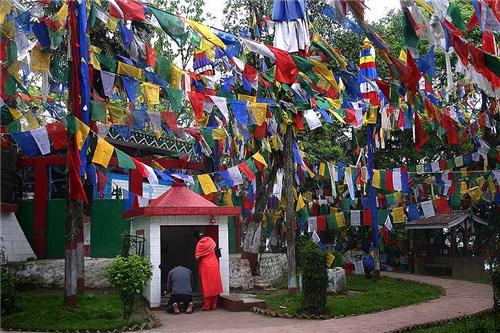 The Mahakal Temple, located at the top of Observatory Hill, is one of the most venerable places in Darjeeling. In fact, the place is revered both by the Hindus and the Buddhists. The deity Mahakal is the “Kalo ko Kal”. Loosely translated, it means He is the Master of Kal or Time and nothing moves without His permission. However, before we pay our homage to the deity, let us first look around the place and try to learn something about its history.

History of the Mahakal Temple

It is said that the history behind the name of the town is intertwined with the history of this very place.  In 1765, long before the British came, a Lama called Dorje Rinzing built a monastery on this very spot. The monastery was known as the Dorjeling Monastery and the place came to be known as Darjeeling. Some of course believe that the name of the town has been derived from two Tibetan words ‘dorje’ meaning thunder and ‘ling’ meaning storm. Let us however, go back to the history of the place.

As we have already mentioned, a monastery was built by Lama Dorje Rinzing in the year of 1765. In the year of 1782 three Shiva Lingas self manifested themselves on this very hill top.  The trouble actually started when Gorkhas from the Nepal invaded the place in 1815. They ransacked and destroyed the monastery leaving the three Shiva Lingas intact.  Nonetheless, the monastery was rebuilt later in 1861. However, for some unknown reason it was relocated to the Bhutia Busti and began to be known as Bhutia Busti Monastery.

Of course, that does not mean that the Buddhists no longer have anything to do with this place. In fact, both the faiths co-exist harmoniously and pay reverence in their own way. While the Hindu priests can be heard chanting mantras, Buddhist Lamas can be seen reading out from their holy book or saying their prayers in their muted tone. Triangular flags, which are symbols of the Buddhism, can be seen flying in the breeze in all directions. 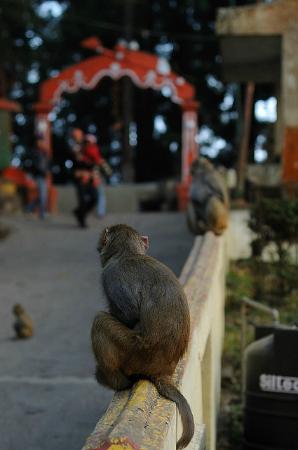 Nonetheless, one should be a little careful, especially once he/she nears the temple. The place is infested with monkeys, who keep a sharp look out for people carrying food package in their hand. Unfortunately, they have no time to decide if the thing in the hand is food or not. As a result, if you are carrying even your purse in your hand, you are likely to lose it. Otherwise, they are absolutely harmless. 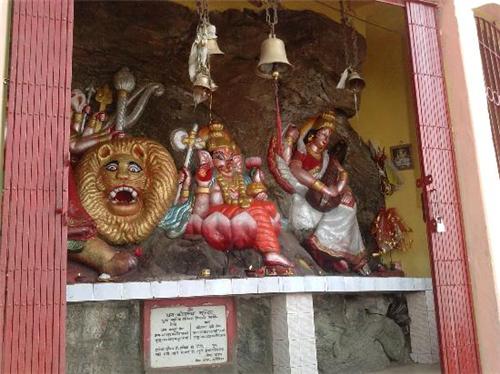 It does not take long to reach the top. The temple of Siddhi Sai Baba is located on the last bend outside the main temple complex. A Hanuman Temple has also been erected next to it. As one enters the temple complex, one can hear the bells ringing and devotees singing hymns.

All over the place, one can see hundreds of Buddhists flags fluttering in the winds. Indeed, such coexistence of two different faiths is hard to come by.

The Mahakal Temple is not the only temple within the complex. Apart from the main temple, there are also separate temples for Goddess Kali, Durga, Ganesha, Radha and Krishna etc. A Chorten, which is actually a Tibetan memorial shrine, is located just beside the Mahakal temple. It holds the relics of Dorje Rinzing Lama.

A visit to the Mahakal temple cannot be complete without a visit to the Mahakal cave. It lies outside the temple complex, but very close to it. While coming down from the complex, one should be on the lookout for a yellow colored arch. From there, a flight of steps take the visitor down to the cave. Along with Shiva, Mother Durga is also worshiped there. 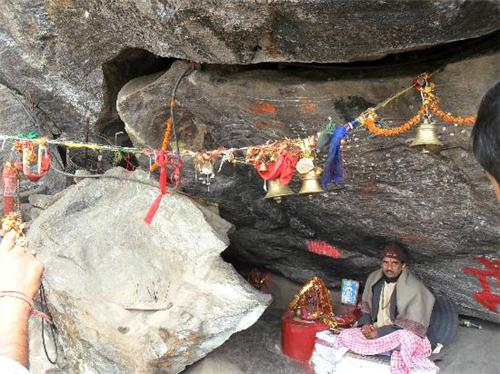 The view from the top:

The view from the top is truly awesome. On a clear day, one can see snow clad peaks standing in a row. Nearer home, one sees green lush forests with wild flowers in bloom. Pretty birds fly here and there singing all the time. Indeed, a place such is this will mesmerized both the devotees and skeptics alike.

How to reach Mahakal Temple in Darjeeling

The Mahakal Temple being located on top of the Observatory Hill can only be approached through the Mall Road.  From the Chowrasta Mall, it is best to enter the road from the right hand side and keep the eyes fixed on the hill side. Within hundred meters or so, one will find flights of stairs going uphill. It will ultimately lead to the Mahakal Temple.

However, soon the steps will give way to a narrow winding path. Tourists from plains may find the trek a little too difficult. However, there is nothing to fret. The journey is not at all long and there are plenty of benches placed at strategic places for them to sit and rest.