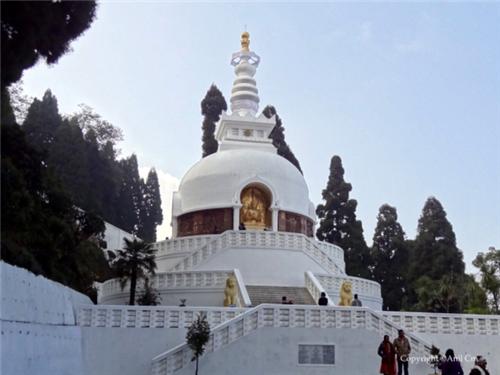 The Peace Pagoda in Darjeeling is constructed under the guidance of Nichidatsu Fujii, the well-known Buddhist monk, who risked the ire of the rulers to resist the World War II in Japan.  He was the founder of Nippozan Myohoji Daisanga , a small Nichiren Buddhist order that considers the Lotus-Sutra to be highest expression of their religion. Moreover, they actively take part in worldwide peace movements and resist war everywhere in the world.  Building peace pagodas across the world is also another of their important activities. Their first two peace pagodas were built in Hiroshima and Nagasaki, the two cities that were razed by the atom bomb in 1945.

In India, there are six such pagodas built under the guidance of Nichidatsu Fujii . The first one was built in Raj Gir; it was opened in the year of 1969. The next one to be built is the Darjeeling Peace Pagoda. Although the work started in 1972, it was dedicated twenty years later on 1st November, 1992. Others cities to have peace pagodas are New Delhi, Dhauli Giri, Ladakh and Vaishali.

Peace pagoda in Darjeeling has been dedicated as a monument for peace. It has been designed by M. Ohka, but the foundation stone was laid by Nichidatsu Fujii himself. Adjacent to it is the Nippozan Myohoji Buddhist Temple. It is however, known simply as the Japanese Temple. Visitors generally start their pilgrimage with a visit to this temple. We too will do the same. 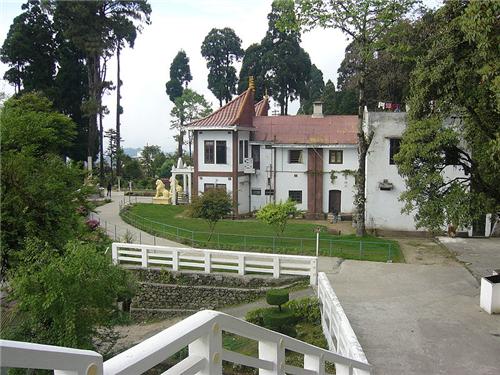 As we walk towards the temple, we can feel peace and tranquility engulfing our whole being. At the gate of this two storied building, we can see two huge statues of lions standing as if in guard. As we enter, a beautiful picture of Nichidatsu Fujii welcomes us into this abode of peace. There is also a statue of Lord Buddha.

We will next walk up the wooden stairs and enter the main prayer room. It is a large room; anybody can sit and pray there. The head priest generally conducts the prayer. As he offers his prayer, he beats a huge drum known as Ho-Ko. The drum produces a deep reverberating sound. Together with the chants, it creates a heavenly atmosphere all around.  Visitors attending the prayer are also given a small drumming pad and a stick so that they too can join in the prayer. One is however, expected to beat the drum in the same rhythm.


The Peace Pagoda in Darjeeling: 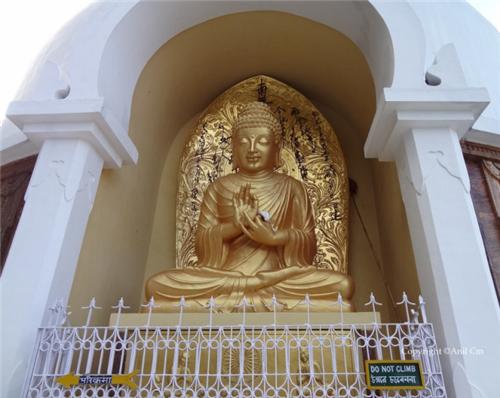 As we have already mentioned that the followers of Nippozan Myohoji Daisanga holds the Lotus Sutra in high regards. According to this Sutra, Peace Pagodas are embodiment of Lord Buddha and their very existence radiates peace all around, purifying not only the body and soul of people around, but also the land on which they stand.

The Peace Pagoda in Darjeeling is indeed an impressive building. With a height of 28.5 meter, it is easily the tallest structure in town. It has a diameter of 23 meters. Here too two concrete statues of lions stand guard at the door. As we walk in, we see large statues of Buddha carved out on the wall. These are however, polished with golden color.  Beside the four statues of Lord Buddha, there are other artworks, some depicting the life of Buddha Himself, others depicting stories intertwined with His life.

The views from the top of the Pagoda are also very much awe-inspiring. There is greenery all around. On a clear day, one can see the snow white mountains at a distance. The atmosphere is indeed one of peace and tranquility.

The Peace Pagoda is now easily approachable by car and therefore, one can take a taxi from downtown and reach the place in ten minutes. However, from the parking area one will have to walk five or six minutes to reach the complex. At the same time, it will not take much time if one prefers to walk all the way. In such a case, one may take the Dr. Zakir Haussain Road from Chowrasta Mall, which will ultimately lead to Jalapahar Road.  The Peace Pagoda is located on Jalapahar Road near the iconic Lal Kuthi. The later now houses the GTA office. 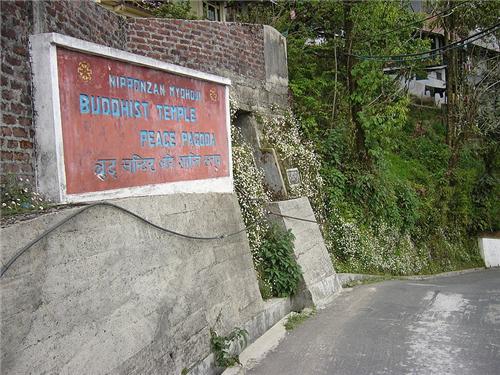 The complex is open from 4:30 AM to 7 PM.
Payers are held twice a day.
In the morning, they are held from 4:30 AM to 6 AM and in the evening from 4:30 PM to 6:30 PM.
It is best to visit the complex when the prayers are on. However, visitors will be able to enjoy the peace and serenity even if they choose to go some other time.