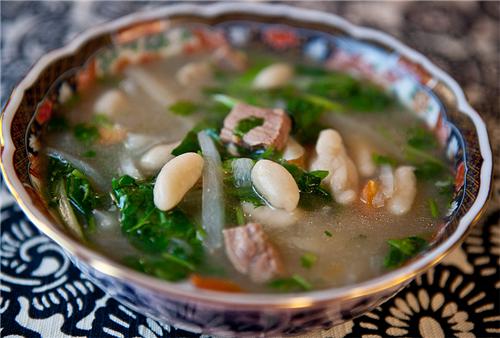 Culinary tradition of any country depends on a lot of factors such as the climatic condition of the land, availability of the raw material, lifestyle as well as religious beliefs of the inhabitants. Tibet located at very high altitude has a very harsh climatic condition. Crops can be grown only in some pockets. That is why traditionally Tibetan cuisine consisted of meat and milk. Barley that grew in the lower altitude was the most popular cereal. In extreme cold climate, eating of raw meat that was preserved in a special way was also quite popular.

It has to be admitted that in spite of limited availability of raw materials, Tibetan cuisine offers a great variety of dishes. Although it has been influenced by Nepali and Indian style of cooking to some extent, Tibetans try to adhere to the original recipe as much as possible. At the same time, introduction of different vegetables and fruits, which are now more easily available, have made their diet more whole some. Following are some of the most common dishes consumed by the Tibetans in Darjeeling.

Tsmpa made from Roasted Barley

Originally Tibetans had Tsmpa made from roasted barley as their staple food. They mixed buttered tea with the roasted barley kneading it with their fingers for a long time to make a dumpling-like object. They then consumed it with more butter tea. Sometimes beer or even water is used instead of the buttered tea.

Today however, wheat flour is a popular cereal food. Noodles made from it are used to prepare various dishes. Thukpa is a noodle soup of Chinese origin, but it has been made indigenous by the Tibetans. From Tibet, the recipe has spread over to Nepal, Bhutan, Arunachal Pradesh and Sikkim. To make different types of thukpas, Tibetans use differently shaped noodles. Originally, the Tibetans consumed thukpa only at dinner. Today, along with momo, it has become one of the most popular food stuffs in Darjeeling.

Thenthuk made with wheat Flour Dough

Thenthuk is also another common Tibetan soup made out of wheat flour dough, pieces of vegetable and meat. To make this dish a soup with vegetable and meat is first prepared. The dough is flattened, cut into shapes and added to the boiling soup at the last moment. This dish is served both at dinner and lunch.

Sha Phaley, bread stuffed with seasoned meat is also another popular dish today. It is either deep fried or pan fried. Often shredded cabbage is added to the filling.Tibetans generally eat sha phaley with chutney, but tsmpa is also another popular accompaniment. Balep is also a type of flat Tibetan bread eaten mostly for breakfast or lunch. 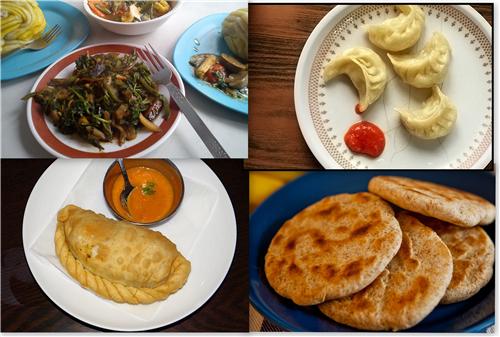 Momo today has become an internationally famed dish. It is generally cooked over steam in a momo-pot. Fried momos are also available in some restaurants in Darjeeling. Originally, Tibetans used yak meat or pork to prepare it. Today however, all types of meat are used. One may have momo either with chutney or with soup. 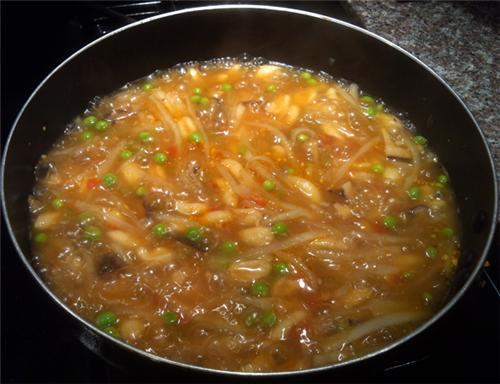 Guthuk is also another Tibetan soup. However, this variation of thukpa is mainly consumed before Loshar, one of the most important Tibetan festivals in Darjeeling. It is said to drive out the negativity. Khapse, a type of Tibetan biscuits, is made from flour, egg, butter and sugar. Also known as Sherpa Biscuit, it is mostly consumed during the Loshar. Dre-si and Changkol are two more dishes which are prepared during this time.

Earlier, cheese was almost a staple diet for the Tibetans. Today we find a few verities of cheeses in Tibetan cuisine. A softer variety resembling cottage cheese and a hard cheese called chura kampo are qmost common. Churpi is an extra hard cheese made from solidified yoghurt. Tibetans often eat it in combination with niguru, made from the stems of a fern like plant. 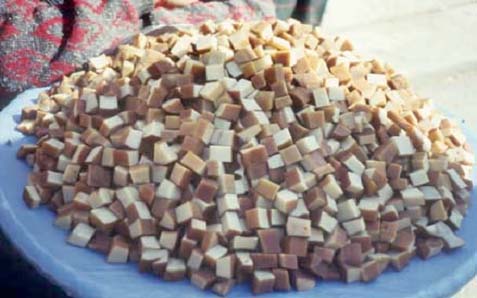 Traditional Beverages of Tibet in Darjeeling

In their homeland, Tibetans drank multiple cups of butter tea. It is still a favorite beverage of the community here. Lemon tea with ginger and honey is also another favorite drink.

Among the alcoholic beverages, chang is a popular drink and so is thomba. Chang is made mostly from barley, but millet and rice grains are also used. Thomba on the other hand is made only from fermented millet. The millet is served in a bamboo glass and hot water is added on top of it.  One keeps refilling the glass with hot water until the drink loses its potency.  However, Tibetan Buddhism does not encourage drinking and that is why alcoholic beverages are not very popular among the devout.

Some Tibetan Restaurants in Darjeeling

Kunga, Dekevas, Hot Stimulating Café, Hasty Tasty, Shangri La, Foot Steps Café are some of the restaurants in Darjeeling, which serves authentic Tibetan food. Therefore, if you are in mood for Tibetan meal, you can visit any of them. However, among them, Kunga and Dekevas have been praised as much for their preparation as for the amount per serving.

Explore more about Food in Darjeeling